From Carlton Hill – my favourite view of Edinburgh, including most of the city landmarks.

“The prawns are like toys!” was the amused observation of Alberto the Colombian chef, as he moved the hapless crustaceans’ tiny joints to demonstrate. I was delighted by this. I was also up to my elbows in very hot soapy and greasy water, handling multitudes of the small brown tapas plates that slipped around beneath the surface like so many circular slippery things.

It was a pleasant enough kitchen to be working in, if one was forced to wash dishes to make ends meet. The establishment was called Tapas Olé and was situated in New Town, Edinburgh, half an hours’ walk from the Royal Mile where I was living out the winter in an ex-tuberculosis hospital now known as Castle Rock Backpackers. Answering a note pinned to the hostel wall seeking a cash-in-hand dishwasher for six days a week, the job was the solution to my quiet financial desperation. It would also supplement the ‘work for your board’ cleaning that I performed; scrubbing backpacker hair out of plugholes, mopping poached-eggy kitchens, changing sheets with boy germs. 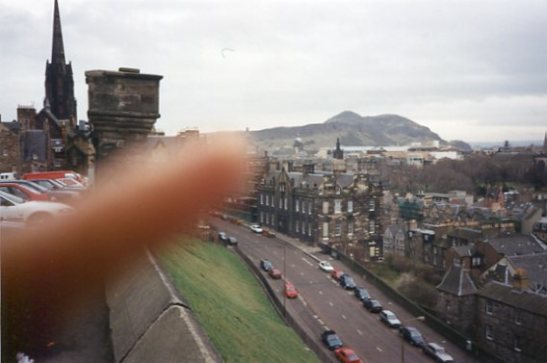 Tapas Olé  was staffed 97% by Spanish and Colombian folk. The other 3% were me the Kiwi, the Scottish co-owner, and a mild-mannered guy from Albania who shared the chef shifts with Alberto. It was, believe it or not, my first time ever working in a restaurant, having somehow escaped this fundamental element of the student life. Nor did I find here any stereotypes of fiery or bad-tempered chefs who abused waiting staff, biffed kitchenware about the place and shagged the waitresses. Alberto and Maurice were quiet, easy-going and spoke enough English for light conversation, and to ask if I’d mind chopping some garlic or yanking the backbones out of a bunch of small fish. Alberto had good-naturedly declared me to be a “strong and difficult woman.” I think he was probably not using the right words. I hadn’t even remotely started to be strong or difficult! Trust me 😉

Scraping leftovers into the rubbish bin often revealed meal debris intermingled with cigarette ash, from punters who couldn’t be bothered distinguishing their plates from the ash trays provided. I asked the boss where the non-smoking section was. He looked at me like I was nuts. “Non-smoking section? Those would be tables we can’t fill.” It was 1998, and the whole of Scotland was hazy indoors.

The radio dial in the kitchen was cemented on a music station that poured out endless synthy Brit Pop without variation. Nothing kills The Verve’s ‘Bitter Sweet Sympathy’ like hearing it every two hours, every day. I started to long for the good old Aussie rock I’d merely tolerated while growing up (being the New Romantic kid that I was). But now I would’ve wept with joy into my rubber gloves to hear Jimmy Barnes, Midnight Oil – heck even John Farnham would’ve been almost welcome. Almost.

A pack of sweet-faced young Spanish student waiters glided in and out of the kitchen, including Santo, who keenly practised his English slang. “Can I get you a fucking Coke?” he’d enquire of me as I wiped my brow during a sweaty Saturday night workout at the sink. Upon arrival each day, I became used to being greeted by a kiss on three cheeks – left, right, back to left. Take that, all you other Euro types with your two cheek kiss. By the time I’d finished my days at Tapas Olé  (essential retirement caused by my hand muscles seizing up) I was fully sold on the idea of holidaying in Spain, which I did a couple of months later. But that’s another story. 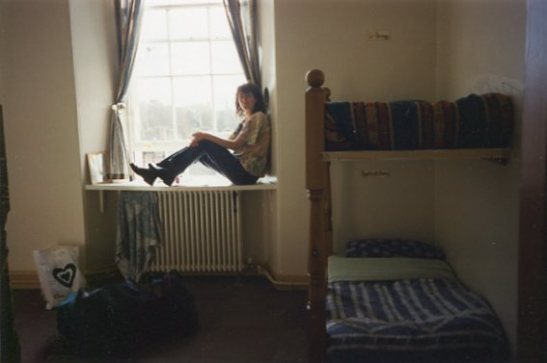 Pastures new. About to depart the dorm room that’s been my home for 3 months.

This entry was posted on August 6, 2015 by Kez in Travel anecdotes.