Ah, this amazing wave that broke over the wall, frightening a sheepdog and his small boy. It was sighted at the end of an impromptu road trip through Northern Ireland, at the end of a northern winter.

For four days I’d been on the road with Julie, an Australian friend I’d met in Scotland, and three others we’d met in Belfast: Steve the Hippy, as we ever after called him, and two girls whose names I forget, but who were responsible for the tension in the car. Steve didn’t like them, and they didn’t like him. Steve was a local who had only just returned from living in the Canary Islands for five or so years and was your typical dreadlocked lifestyler. Julie and I ‘got’ him though. We were in a chilled-out state of our own after being cooped up in Edinburgh all winter, and were fairly accepting of unwaged strangers bearing bongo drums.

The road trip idea had been floated at the backpackers. Steve had errands to run and was keen to share transport costs. It seemed like a good idea, so with the two girls and a hired car, Julie and I spontaneously accompanied yer man on his quick cross-country journey to repay a debt, drop off a small parcel (illegal or not we did not know), visit his cousin and two lots of his friends. 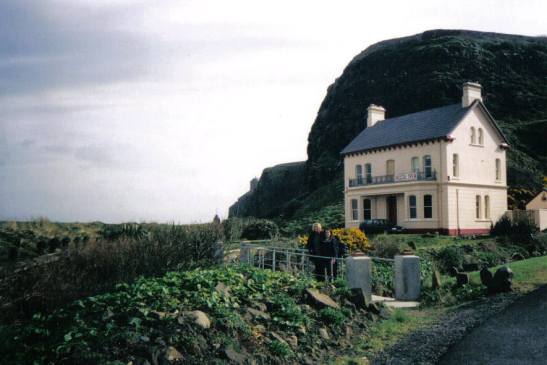 We stayed at a hostel in Downhill, this lovely but isolated place above, on the north-western coast of Northern Island. The hostel owner’s nervous Canadian bride had been living there just a month and was experiencing a groaning home sickness and conflicting amazement at her surroundings. (Trivia for Game of Thones fans  – Downhill Beach later became the filming location for Dragonstone, where Melisandre burns the Seven Idols of Westeros.)

Our group then breezed in and out of Glenn Colm Cille across the Irish border in Donegal; a rugged coastal place that charmed me so much that I would return two years to later to do a bodhran (Irish drum) workshop.

Some wonderful hospitality was enjoyed from Steve’s acquaintances  – at a small white-washed classically Irish cottage in the peat fields; at a piebald horse breeder’s outside Armagh; and a town called Rostrevor, back on the east coast near the other end of the Irish border.

Anyhoo. This wave, and others like it, occurred on our last day, on the beach front at Newcastle, Northern Ireland. Doesn’t nearly every nation have a ‘Newcastle’?

This entry was posted on September 19, 2016 by Kez in Travel anecdotes.